We exist to glorify God by making mature disciples of all nations.

Pendleton Street Baptist Church is a community of believers centered and growing in Christ Jesus. We are passionate about loving Jesus and making Him known in Greenville, SC and around the world. We welcome you to join us for Christian Life Academy and worship services on Sundays, or to one of our many Home Groups meeting throughout the week in the greater Greenville area.

If you would like to speak with someone about Pendleton Street Baptist Church, please feel free to email us or to call the church office at 864-232-7312. We have lots of information here on our website, but we’d love to hear from you, too!

meet the staff
what we believe

a brief history of PSBC

Two circumstances in 1889 led to the formation of Pendleton Street Baptist Church (PSBC), in Greenville, SC. One, a burgeoning population growth was taking place on the west side of the Reedy River, and two, these residents were finding it difficult, if not impossible at times, to ford the then un-bridged Reedy in order to attend Greenville First Baptist Church on West McBee Avenue downtown. So, on March 3, in a room over Gibbs’ Grocery Store on Pendleton Street, a number of Greenville First Baptist Church members met as a mission Sunday School. The little mission grew quickly and one year later it was ready to become a church. 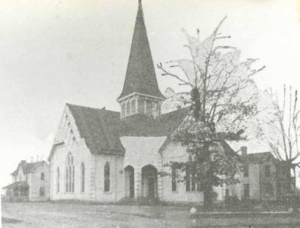 On a 50 x 150-ft. lot at the corner of Perry Avenue and Pendleton Street, the first church building was erected in 1890. As growth demanded more space, the original building was enlarged. The Hahn Building was completed in 1938, the Educational Building in 1951, and the last sanctuary in 1962. The original, often modified, sanctuary was demolished in 1972. In its place, the Rivers Building (gym) was erected in 1973. By extending South Main Street to include several blocks of what was formerly Pendleton Street, the City of Greenville recently changed PSBC’s address to 1100 South Main Street. Over the years Pendleton Street Baptist Church bought additional property so that the church would occupy the entire block except for the corner lot at Markley and South Main, occupied by Saint Andrew Episcopal Church. 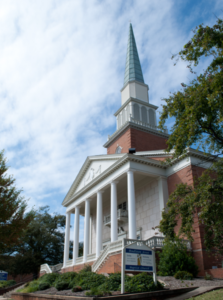 In recent years, with population changes and the gentrification of the West End of Greenville, several investment groups had become interested in the church property. After praying and seeking the will of God concerning these inquiries, the Leadership Team and congregation of PSBC felt God leading them in a new direction concerning the physical property of Pendleton Street Baptist Church. After months of prayer and discussion, on June 14, 2015, the congregation voted to sell a portion of the property to Woodfield Acquisitions.

Currently, Pendleton Street Baptist Church has been meeting for worship at the Hilton Greenville at 45 West Orchard Park Drive. Several small home groups meet during the week at members’ homes. (We normally have other events, classes, Bible studies, etc., and will resume these programs as soon as the pandemic has been eliminated.)  The church leaders and members believe it is God’s will for them to continue in their ministry to the West End of Greenville, South Carolina. To that end, PSBC has purchased property, including an office building, at 123 Arlington Avenue, and is in the process of planning additional uses of this property, with hopes of being great benefit to the neighborhood and surrounding community.

From those first ninety-seven charter members in 1890 until today, Pendleton Street Baptist Church members have sought diligently to know and follow God’s will. Much more than bricks and mortar, PSBC is a family of faith with a rich heritage steeped in the love of God as expressed in worship, Bible study, ministry, and missions. Pendleton Street Baptist Church is here today through the grace of God and through the sacrifice, foresight, and faith of those brothers and sisters in Christ who have gone before him.

Pastor Marty Price has been the pastor of Pendleton Street Baptist Church for 17+ years, since 2003. He and his wife Suzanne have a son and two daughters (all married), and 6 grandchildren (soon to be 7 grandchildren)!

Pastor Marty is 60 years old and has been serving in ministry for 34 years. Marty prepared for ministry by studying at Mid America Baptist Theological Seminary in Memphis, transferred to New Orleans Theological Seminary, and now Pastor Marty has a M. Th. from Covington Theological Seminary.  Marty doesn’t anticipate pursuing any additional degrees, but he will continue to take advantage of opportunities to learn more of God’s Word and develop tools to lead this congregation.

Marty has a true pastor’s heart. He is committed to bring the truth of God’s Word to the PSBC family and to spread the gospel of Jesus Christ to the community – not only in word but also in deed.

On Sunday, March 24, 2019, PSBC ordained Rev. Scott Stephens to the Gospel Ministry.  Scott has been a member of PSBC since May of 2014.  Scott has received a master’s degree in biblical counseling the Southern Baptist Theological Seminary and is currently a PhD student studying biblical counseling at the Southwestern Baptist Theological Seminary. In addition to his seminary studies, Scott has completed a 2-year study at the Redeemer Biblical Counseling Training Institute where he currently serves as a board member. His wife, Loretta, is currently working on her 2-year training at the Redeemer Bible Counseling Training Institute as well.

For the past 7-years, Scott has been a counseling resource for PSBC and has provided counseling to area pastors through the Covenant Counseling Center, a not-for-profit organization he started to help pastors with their counseling needs, as well as to provide training in “one-anothering,” and the basics of biblical counseling for their small-group leaders. He serves on the Leadership Team, and has fulfilled many pastoral duties, including preaching.

If you are interested in counseling, you can find more information at this link, or call the church office at 864-232-7312. 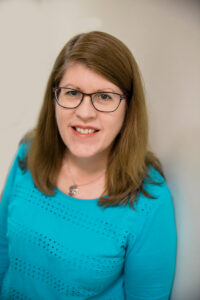 in the Holy Scriptures as originally given by God, divinely inspired, infallible, entirely trustworthy; and the supreme authority in all matters of faith and conduct

the first person of the Trinity in authority who sovereignly reigns over His universe, Father in truth to those who become children of God through faith in Jesus Christ

Jesus, the only begotten Son of God, born of a virgin, wholly man and wholly God, died as a substitutionary sacrifice for the sins of mankind, arose from the grave defeating the power of sin and death

co-equal with the Father and Son, present in the world today to make people aware of their need for Jesus Christ, living in every Christian from the moment of salvation

a free gift of God provided through Jesus Christ, who by His own blood obtained eternal redemption for those who believe

a congregation of baptized believers under the headship of Jesus Christ, with the purpose of glorifying God and making disciples

every person will be judged by the Lord Jesus Christ upon their death and will be raised again: the saved to eternal life with our Lord and Savior, the lost to eternal torment in hell and separation from God

A complete statement of our beliefs is available by clicking HERE